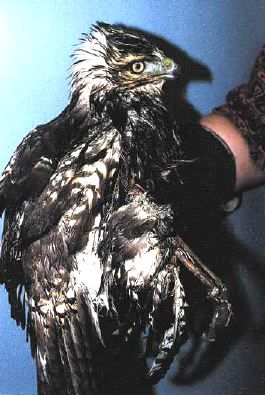 This hawk was shotgunned — a felony punishable by fines and/or imprisonment. Virtually all birds are protected by law. This photograph was taken shortly before the bird was euthanized. Broken in body, but not in spirit, there was no option left for him but death.

“Electra” is a Red-tailed Hawk. Appearance-wise, she is not at all a good representative of her species. One eye is still clouded from a healed ulcer, and her uncertain balance has caused her to break more than a few feathers, but I see only the beauty of her wild spirit, for her broken body contains a life-force that surpasses that of many creatures less injured, and with better chance of eventual release. Her eyes are alive, totally aware, her posture proud on her perch, her preening careful. She has progressed tremendously from the comatose bird sustained by intravenous fluids who could not perch, let alone feed herself.

She is my bane and my blessing, as I struggle to determine her future, for it lies in my hands. And who am I to presume to play God?

“Electra” is common, as common as you, or I. Her death will not affect her species (which is not endangered) or even many humans, but it will affect her, and so it affects me. She has been my teacher, and the lessons, useful and hard, include this: the greater the need, the greater my desire to meet that need.

This doesn’t make sense, in practical terms. In wildlife rehabilitation, as in war, triage, that logical and objective rationale of selection, demands that those who have the best ultimate chance of full recovery are given priority over those who are more severely injured. I wonder if this is really so on the battlefield, in human crises? Do army surgeons and doctors in emergency wards really turn away from those who are in greatest peril in order to assist those who are simply ill? Do they really make decisions based on who is most “viable?” For the sake of our humanity, I hope not. I hope that somehow all are treated fairly, with the same respect for the single consciousness that inhabits each physical body.

This is not to say that I do not believe in euthanasia for wild creatures for whom a peaceful death is a better alternative than suffering. Creatures like “Electra,” however, who are not suffering, who have not given up hope, are not in this category and so provide the most painful part of our work, and the most challenging.

I can say that, as I am a “professional,” I accept absolutely and without reservation that my responsibility is to take the life of any who should, but will not, die, but I must also say that every time I have to make that decision, I am also injured, and the injury leaves not a callus, but a scar.The majority of creatures with which we work will either recover and be released, or will give up and die quickly without our assistance, but it is the “Electra’s” who test our mission fully, for they force us to ask the hardest questions and demand we answer honestly in order to find the real meaning of compassion and respect for life.

So what about “Electra?” For now I wait, and I watch for any minute sign of improvement, and for any minute sign of failing. But I do wait. “Electra” has only one second chance, and I am it.It would be easier on the rehabilitator not to invest the time and emotional energy that are demanded by severely injured animals that have only the most marginal chance of release, but Fellow Mortals’ mission is not about “convenience,” not about “conserving resources” by triaging out the marginal cases, it is about never forgetting that each of us — human and non-human, common or not — has only one life, and we are determined to do all that is in our power to sustain it. This determination has been rewarded over and over when we are able to release animals that applied triage would have recommended be euthanized on admittance.“Electra’s,” thankfully, are few. But I am thankful they exist.