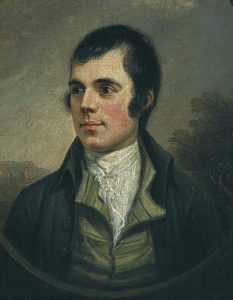 On January 25th many people around the world celebrate the anniversary of the birth of the Scottish poet, Robert Burns.  It has been estimated that over 9 million people attend Robert Burns “Suppers” around this date, where his poems and songs are enjoyed by all attending.

Robert Burns became a world renowned icon during the 19th century with more than 60 statues dedicated to him in parks and public places.  (Of the world’s complement of non-religious statues, only Queen Victoria and Christopher Columbus have more).  His poetry and ideals became very popular in the USA, especially among politicians who were looking to develop their new democracy.  Abraham Lincoln was known to carry a book of Burns poems on his travels and he was able to recite long Burns poems from memory!  Sixteen statues are known to exist in the USA, with the nearest to Fellow Mortals being in Burns Square, Milwaukee and in Garfield Park, Chicago.

Many Burns phrases became part of American vocabulary, such as “the best laid schemes, of mice and men, gang aft agley” (often go wrong), or “to see ourselves as others see us.”  Many American songwriters used Robert Burns poems as the source of their inspiration — Bob Dylan even claimed Burns’ “Red, Red, Rose” as the one that inspired him.  “Auld Lang Syne” was adopted as the American song of New Year and is now sung at the end of events all over the world!

But, how does this relate to Fellow Mortals? Yvonne and Steve were inspired to establish their wildlife hospital by an incident which mirrored the event described by Robert Burns in his poem “To a Mouse” (Click Here for the full story) and decided to use a line from the poem to derive the name of the hospital.

“…thy poor, earth-born companion,
An’ fellow-mortal!”

The name “Fellow Mortals” was a great choice by Yvonne and Steve, as Robert Burns referenced nature in 118 of his poems, and his ideals perfectly matched Fellow Mortals’ ideals of care and compassion.