Why Fellow Mortals Deserves Your Support 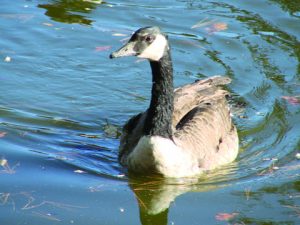 It was a late spring day, more than ten years ago. I was driving home on a busy road and saw two geese get hit by a car.  One lay dead by the side of the road, its mate injured, but refusing to leave its side.  The accident occurred adjacent to a cemetery. As I was processing this tragic scene, I suddenly became aware that several landscapers were fast approaching the injured goose with their shovels raised like baseball bats. I rolled down my window and yelled for them to stop! They gratefully retreated but I was now left to figure out the next step. How would I help this poor goose? I had never touched a bird, much less a very large bird, and I didn’t know what to do or whom to ask for help.

I started with the local police department (who couldn’t help me), then called my own dog’s vet, who said they “maybe could give me the number of a waterfowl rehabber but honestly weren’t sure if she was still doing this….their information was pretty old.” I took the number and left a message.

Still on the side of this busy road, now 30 minutes had passed. I parked so that no one else would hit the injured goose. I thought of a million reasons why this wasn’t a good idea but I couldn’t leave the goose to die at the hands of the landscapers.

The rehabber called me back about an hour later and said she was full and couldn’t help me. She did tell me how to put the goose in my car and told me to call a place called Fellow Mortals. With the goose safely in the back of my car, I dialed the number and got an answering machine. I left the information and my phone number and to my utter surprise and delight, Fellow Mortals called me back within five minutes and instructed me how to find their hospital, about an hour’s drive away.

I had no idea then what a remarkable fate this was, certainly for the goose, but also for the numerous injured or orphaned wildlife that I have since taken to Fellow Mortals over the last decade. Upon my arrival, and an assessment of the goose, I was told that it was a male and that he had an injured wing and would be triaged, treated and rehabbed over the summer and released in the fall if he could fly. Spoiler alert… the goose fully healed and was released!

All the way home, I was overcome with the thought that there are SO many animals and birds that get injured or orphaned each and every day and even if there were someone willing to help, as I was this day, it was just through sheer luck that I found out about this unbelievable wildlife hospital where these creatures are given a second chance at life. Tragically, we have all become numb to the visual of dead or dying animals hit by cars on the side of the road, and, if you’re like me and love nature, it breaks your heart.

We have hospitals and clinics for domesticated animals but what of the wildlife that surrounds us? What I have learned in these last ten plus years is that there are a handful, usually species-specific rehabbers, that you might be lucky enough to find the number for, but it is a difficult process and information is very hard to come by. If you do find someone, they are almost always understaffed or lone wolf operations that are over capacity and lack the time, expertise, and/or financial resources to take in any more patients if they even call you back.

My husband and I have supported Fellow Mortals ever since the day we discovered them, because of the injured goose. Fellow Mortals is a fully licensed wildlife hospital, one of the few like it in the entire country! But our support is not based on emotion or a marketing brochure. It is based on this organization’s unbelievable professionalism, compassion for the animals they treat, the quality of their care (all of their staff is fully licensed and trained…they use NO volunteers to feed/treat the fellow mortals in their care), philosophy, mission and success.

From the moment of admit, each patient is triaged using state of the art diagnostic equipment and if appropriate, given medication and/or surgery by licensed veterinarians. This was incredible to me, the process, procedures and protocols were like a real human hospital. During the rehabilitation process, each species is given the appropriate food and habitat to facilitate its healing and ultimate release. The release rate year over year for nearly 30 years, is as high as 70 percent! That is astounding, particularly when you factor in Fellow Mortals’ philosophy that will not euthanize babies or even critically injured animals unless it is to relieve their suffering if death is inevitable. So, Fellow Mortals’ release rates include the innumerable patients they truly give a second chance to when, as I have learned over the years, many rehabbers, etc., euthanize animals that are too young or injured based simply upon their resources of time and money.

Fellow Mortals is a miraculous place and the people are truly remarkable. What they do every day is extraordinary. If only every human hospital had the compassion, responsiveness and quality of care that Fellow Mortals did. We are so very fortunate to have Fellow Mortals in our area. For those of us who love nature, and the beauty all around us; for those of us who wince when we see an animal hit by a car; for those of us who want to help but don’t know how, Fellow Mortals is the place that I hope you will support. They receive NO public funding, no accolades and no media attention. They rely totally on private donation. Fellow Mortals, like nature herself, perform their miraculous work almost invisibly because they truly care and are passionate about giving our fellow mortals a second chance. My hope is that my own story will compel others to support this phenomenal organization.

To find out how you can become a vital part of our support team, Click Here!