​Wildlife Rehabilitation is still a very young field.  Although professional organizations have existed since the early 1980’s, there are still many states that do not require any formal training or qualification prior to allowing individuals to house and care for wild creatures in their homes.  Fellow Mortals’ founders played an instrumental part in bringing wildlife rehabilitation into the professional sphere in Wisconsin, working with legislators and the Wisconsin Department of Natural Resources and U.S. Fish & Wildlife Service to make sure that wildlife rehabilitation’s unique non-consumptive “use” was properly addressed in the Captive Wildlife Act, passed in 2003, which paved the way to establish standards and regulations relating to the practice of wildlife rehabilitation in Wisconsin. 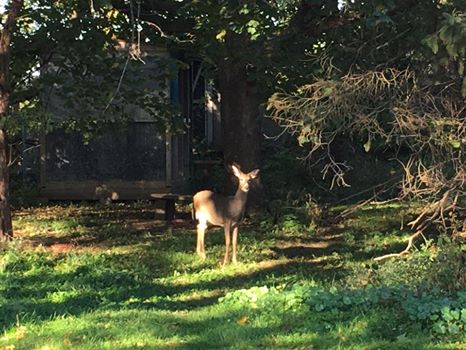 Subsequent to the passing of that law, founders Yvonne Wallace Blane and Steve Blane were appointed to the Wildlife Rehabilitation Advisory Committee by former Wisconsin Governor Doyle, along with five other wildlife rehabilitators in the state, to help draft regulations for the field. They served on the committee until 2013, when it was made an official Advisory Council.  In 2013, Yvonne was appointed to the Wildlife Rehabilitation Advisory Council (WRAC) by Governor Walker, and she served as elected Chairperson for the first six years of the council’s existence, from 2013 until 2019.

Fellow Mortals is currently one of the largest wildlife hospitals in the state and the nation, yet it operates much the same as it did when first organized by its founders and run out of their home.  Our operating model is the same as that applied to nurses tending to human patients: consistency is important for patient well-being and results in better care.

Where other similar-sized facilities employ volunteers for animal care, who may only see the animals one day a week for a few-hour shift, wildlife admitted to Fellow Mortals receives care from a limited number of knowledgeable and experienced professionals who see the animals nearly every day.  Where other facilities admit wildlife and then transfer it elsewhere for care, wildlife admitted to Fellow Mortals stays at the hospital from admit to release.

Belief is not enough to raise funds, however, which is why the professional care provided to the wild creatures brought to Fellow Mortals wouldn’t be possible if not for the extraordinary compassion and commitment of the wildlife rehabilitators who work long hours 365 days a year for a fraction of what they would make elsewhere as qualified wildlife biologists, veterinarians and in other professional categories.

Fellow Mortals is a living philosophy, and our staff and interns work every day to put that philosophy into practice through rehabilitation, education and research.  Our goal is to inspire other rehabilitators and facilities who see the possibilities in our approach.