How Our Story Began

Those of you who have only recently learned about Fellow Mortals know us as a wildlife hospital with all the accoutrements of professionalism — licensed wildlife rehabilitators, an intern program, an annual dinner event and a newsletter in full color, laid out professionally and including information on the many aspects of our work.  You may not know that Fellow Mortals is still run by its founders, Steve and Yvonne, and may not know just how far Fellow Mortals has come in the three decades since we were first licensed to provide care for injured wildlife. 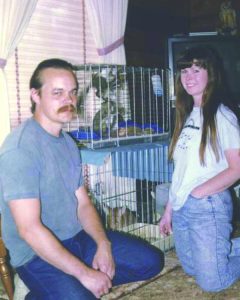 Steve and I come from very different backgrounds.  He’s a Chicago boy and I grew up in the country near Burlington, Wisconsin.  As often happens, people ignore what they are accustomed to — take it for granted — and that is how I was with wild things, despite my mother’s interest in nature.

Coming from the streets where a baseball bat was the most common hardwood, Steve was fascinated with being able to go out into the woods and explore the land and learn to know the wildlife that lived there.

My interests were bookish and the piano.  I fully intended to make a life in the arts but since I had no useful skills, I pursued secretarial training which led to work as a paralegal and thoughts of law school after college.  And then one summer day in 1985, when I was doing the mowing at a mobile home park Steve and I managed at the time, I ran over a nest of rabbits and my life changed in an instant.

I didn’t know what to do or where to turn.  I was hysterical and in tears over what I had done.  Making call after call resulted in no useful information, but a lot of depressing advice — “Let nature take its course” (is the lawn mower natural?)  “Don’t bother trying to feed them, they’ll die anyway.”  “We don’t work with wildlife.”  After a few of these calls, Steve told me “We’re not going to let them die,” and those rabbits were the first patients of what was to become Fellow Mortals Wildlife Hospital.

Of course we told everyone who would listen about the rabbits.  You would think there had never been such gifted and beautiful animals before!  Because of this, we received more rabbits the following year and it wasn’t until 1988 that we learned that a license was required to do what we were already doing. Being the law-abiding couple we are, Steve made the proper enquiries and we were both issued licenses that year.

Sometimes I wonder what my life would have been like if I had never run over that nest of bunnies — which were all released, by the way — and I know that although it would have been much less complicated, it also wouldn’t have meant very much in the end.

So if you’re someone who didn’t know the history of Fellow Mortals, and you’ve brought an animal to our hospital and been afraid to leave it because you think a large facility can’t possibly care about one more little sparrow, or duckling or rabbit — you can relax.  Our only job at Fellow Mortals is to care for the little ones brought to us, and we take our responsibility seriously.  Each creature is precious, as precious as those first cottontails.